(I AM GOING TO LINK THIS ON THE FREE GRAPHICS PAGE AS WELL.  THERE ARE POSTERS ALL THROUGH THIS ARTICLE.  IF YOU CLICK THE PICTURES, YOU WILL BE ABLE TO DOWNLOAD THE FULL SIZED VERSIONS WHICH CAN BE PRINTED WITH ANY POSTER PRINTING PROGRAM.  THEY CAN BE LAMINATED, AND GLUED TOGETHER.  THE BEST GLUE FOR THAT IS ANY KIND OF 'GOOP' GLUE.  THAT IS HOW I USE THESE AS SIGNS ON THE LIBERTY VAN WWW.LIBERTYVAN.COM.  YOU ARE WELCOME TO USE ANY OF THEM SO LONG AS IT IS NOT TO SERVE THE GOALS OF THE ANTI-SMOKERS.  ANY SUCH USE AS THAT I CONSIDER A VIOLATON OF MY COPYRIGHT.  LYNDA FARLEY 2010)
This is a response I made to a couple of the smoker's email lists, and it's important, so decided to share it with those on my private smoker's (and spiritual - as it's really about LIES) lists as well.
>This is not a question on whether smoking is a health risk, it is, and no one is
>arguing that anyone promote risky behavior
When I did in depth research on that, I found the JURY IS STILL WAY OUT ON THAT TOO.  NO one has looked at the HUGE INCREASES in MULTIPLE HEALTH problems that result from folks QUITTING smoking, NOR at the huge increases in health problems that have happened AT THE SAME TIME as the number of folks STARTING smoking HAS BEEN FALLING PRECIPITOUSLY.
The issue of smoker's health IS NO MORE 'PROVEN' than 'HUMANS ARE CAUSING GLOBAL WARMING'.  And, if SMOKERS THEMSELVES are going to REFUSE to do their homework, and/or REFUSE to look at the truth, and KEEP ON REGURGITATING THE LIES, we WILL never get anywhere.  Best to just NOT address the 'smoker's health' issue at ALL than to continue to help spread the PROPAGANDA.
Here are two fairly new signs I have on the van, on both front doors (the oval is where I trim it to fit around the door handles)
These would make fine posters. Anyone is welcome to use them.  They are about four feet wide, and two feet high, printed with a banner/poster printing program. I use MS Publisher myself. The ones I'm sending here are 'shrunk' versions.  If anyone would like the full sized ones for printing, just let me know.  You can always put something else over my 'door handles' places <G>
(btw, on the van, I added '& NON' above SMOKERS)

Folks, the trends thing especially shows that GETTING RID OF SMOKE IS IN FACT NOT 'improving' ANYONE's health.  Those are NOT BY ANY STRETCH OF IMAGINATION 'cause and effect' relationships!!!!  They LIE LIE LIE about our health.  I put on the bottom of both of those posters EXACTLY WHY I am SO HOT about this issue.  I LOVED my parents, and I watched BOTH of them suffer for DECADES the ILL HEALTH effects of their QUITTING smoking. MY dad's WEIGHT killed him about ten years AFTER he quit smoking (when he was almost 80).  He's actually WON A TENNIS TOURNAMENT when he was almost 70, as a 50+ YEAR TWO PACK OF KENTS - weren't THOSE the ones in the Rose Cipalone case, with the ASBESTOS FILTERS??? - a DAY plus he smoked a PIPE. Oh, it was an amateur tournament (he was a retired engineer) - but in LOS ANGELES, so it was BIG and very competitive.  He had put on some weight as he got older, but he was FIT. Then he remarried an antismoker, and he quit.  I WATCHED him spend the REST OF HIS LIFE hardly able to WALK, let alone play tennis, DUE TO THE WEIGHT he gained after quitting. BTW, his new younger NEVER smoker wife kicked the bucket about 5 YEARS before he did.
And, everywhere I go, and talk to folks, and yes, believe it or not (those of you who have met me) I don't ONLY talk, I LISTEN FAR MORE than some realize
I won't even start about my mom, the short version is she quit at only TWENTY years old, right after I was born, and died of breast cancer at 60 (only ONE year older than I am now), after an ENTIRE ADULT LIFE spent as an INVALID (or semi-invalid) due to SEVERAL of those things on that sign!!!
Nearly everyone I LISTEN to is telling me of a parent, brother, friend, etc. whose health problems STARTED AFTER they QUIT smoking!  The 'high risk' of lung cancer among smokERS actually IS NOT among smokers, but among EXsmokers. For at least forty YEARS these so called 'studies' have LUMPED smokers & EXsmokers into a SINGLE category 'EVER smokers', and they FALSELY say smokERS have a higher risk of LC, when actually the HIGHEST risk is among EXsmokers.  BY the way, the DRUG companies are laughing ALL THE WAY TO THE BANK.
The WHOLE 'smoking isn't healthy' bit is EVERY BIT AS PHONY as the 'humans are causing global warming' thing. And watch and listen, the climate change hoax is borrowing ALL the SAME tactics, and even using the SAME RHETORIC as the anti-smoking hoax.  Yes, you are ADDICTED to OIL - you are BAD (demonize those who turn up their thermostats in winter because they don't want their babies to freeze, etc), then JUSTIFY EXTORTION every time someone turns on a light switch, justify adding EXTORTION to the price of a gallon of gas, etc.  BOTH hoaxes (anti-smoking AND 'climate change) are JUSTIFIED NOT by 'mountains' of 'science', but by MOUNTAINS of JUNK 'science'.  These EVIL people are PSYCHOLOGICALLY MANIPULATING every one of us, and UNTIL the TRUTH comes out they WILL CONTINUE TO GET AWAY WITH IT.  In the case of anti-smoking, if you follow the MONEY as some of us have, you will find the PHARMACEUTICAL industry financing and driving it.  If you follow the $$$$$$ on the 'climate change' hoax, you will find GE as well as some very big politicians (many who are invested in SELLING CARBON CREDITS - INCLUDING BARAK OBAMA, and of course Al Gore) behind that.
EVERY ONE of US must find out the truth, and promote THAT, or WE ARE STILL PART OF THE PROBLEM.
It should be well known that there IS such a thing as the Placebo effect.  There is ALSO a NOcebo effect - yes, some SMOKERS GET SICK JUST BECAUSE they've been told over and over and over again that smoking is making them sick.  Our minds and bodies ARE WIRED together.  Folks tell me all the time how much better they feel because they quit smoking. OF COURSE they do, they are feeling a PLACEBO effect.  Can't tell you how much better I FEEL since I learned smoke is mostly WATER VAPOR, and the pics of supposedly black 'smoker's' lungs are actually COAL MINER'S BLACK LUNG DISEASE (or sometimes DOCTORED PIG'S lungs) : ))))  NEWS FLASH - if you smoke, you MIGHT have 'black lungs' IF YOU'RE ALSO A COAL MINER!  Folks THAT sort of thing goes WAY BEYOND propaganda and disinformation. THAT is in the category of OUT RIGHT BIG FAT WHOPPING LIE FRAUD.
I can understand those who just don't 'like' to be confrontational or too controversial to want to avoid dealing with the whole 'smoking REALLY IS BAD for you' issue.  But geesh, how about, if you don't want to be so controversial, just AVOID that whole subject. We should NEVER help spread the lies.
Since I took my George Washington sign (THE FATHER OR OUR COUNTRY - A TOBACCO FARMER AND A SMOKER) off my roof to make room for all my magnificent EAGLE collection, I'm redoing the smoker's signs on the passenger side rear.  Here's how that will read. 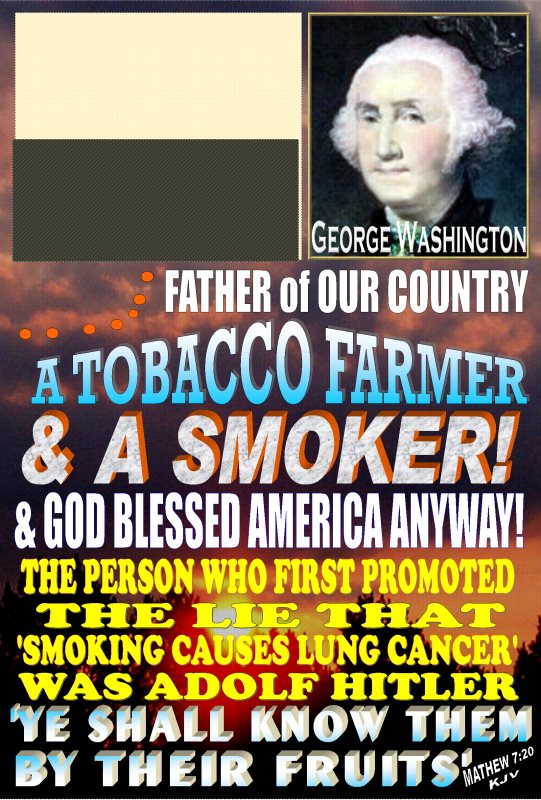 The 'cut out' on that one is where it will go around the tail light.  This one is 'shrunk', actual sign is a couple feet high, and about 18" wide at the wide part.  If you want it, would be happy to send you the full sized one.  Notice I'm taking a shot at all the 'Bible believers' who believe smoking is 'bad' for our health, and/or that God doesn't/won't Bless SMOKERS.
Hitler's henchman Goebbels said something like telling a BIG enough lie often enough would result in 'the masses' believing it.  It WORKS, unfortunately IT IS TRUE - and ANYONE who REPEATS UNtruths is HELPING the devil.
I very much HOPE that if ENOUGH PEOPLE start TELLING THE TRUTH often enough,
perhaps some day 'the masses' will also BELIEVE THE TRUTH.
IN fact, the REASON big pHARMaceutical is TRYING SO HARD to ENTIRELY GET RID OF tobacco use, is that there ARE REAL HEALTH BENEFITS, and THEY CAN'T PATENT it, since it's a NATURAL HERB.  Remember, the native Americans, as well as various societies ALL OVER THE GLOBE have used it MEDICINALLY FOR CENTURIES - probably even thousands of years.  Big pHARMaceutical is WORKING ON developing PRODUCTS BASED ON NICOTINE to treat Alzheimer's, Parkinsons, and EVEN CANCER.  Geesh, wonder WHY they are doing THAT????
One more sign, I have on the hood of the van right now:

I recently finished reading
That is a GREAT book for the HISTORY of tobacco, all over the planet.  I never knew that the AUSTRALIAN ABORIGINES, who are total hunter gatherers, grew ONLY ONE crop - a variety of tobacco, that was used medicinally, and for spiritual rituals, and as THEIR MEDIUM OF EXCHANGE (yes, tobacco is MONEY : )
This is an excellent reference, too.
Note that IN SPITE OF so many 'feeling' so good when they 'quit smoking', because they have actually been brainwashed to BELIEVE they will feel better (yes, that's a PLACEBO EFFECT), NONE THE LESS, MANY of them actually FALL ILL sooner or later with obesity AND/OR STRESS related problems, and the REST of the list that's on my sign above, PLUS other things.  It is NOT a coincidence that all the world's oldest folks (100 years +) ARE SMOKERS.  STRESS KILLS - and tobacco is perhaps the greatest weapon against stress yet discovered by humans.
As for ME, I AM going to
KEEP ON SMOKIN',
and KEEP ON TELLING THE TRUTH.
I will NOT repeat lies just to avoid a controversy.
And, I am not the only one taking this stand. It is the OFFICIAL POSITION of Forces International
www.forces.org, and for doubters, I believe the Scientific Portal there has the largest accumulation
on the PLANET of DOCUMENTATION TO SUPPORT THAT POSITION.
PLEASE spend some more time STUDYING ALL that if you still doubt me.
One last thing, for those who believe The Bible, as I do,

And, while we're at it, here's another poster I like a lot, 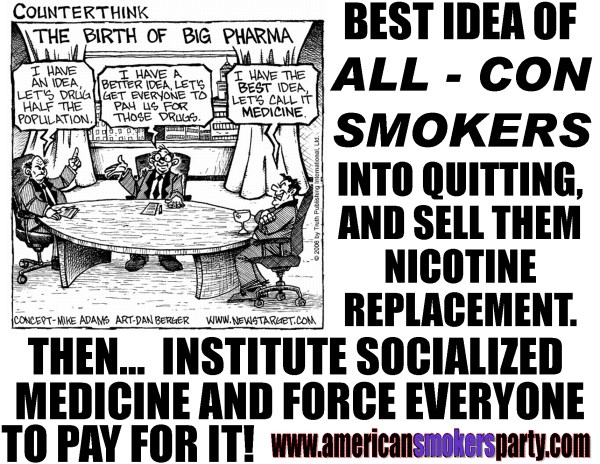 Let's ALL LEARN, START & KEEP SPREADING THE TRUTH,
and I mean THE REAL TRUTH,
because 'thetruth.com' is a BIG FAT LIE!
Lynda Farley - AKA 'Smokin' Kentucky Granny'
RESTORE OUR CONSTITUTION! www.givemeliberty.org
www.forces.org    Smoker's Rights Van:  www.libertyvan.com
Wondering what's happened to our FREEDOM?
Want to DO something about it? http://forces.org/tavern/
Make money for your CAUSE - Click Here